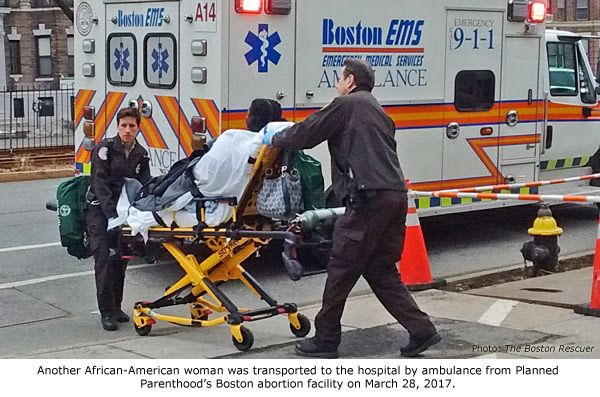 Planned Parenthood in Boston, Massachusetts, called 911 for an emergency transport of an African American female patient on March 28, 2017. Photos taken on the scene by The Boston Rescuer show the patient slightly inclined on a gurney as she is being readied for ambulance transport.

This is the fifth medical emergency transport from the Boston Planned Parenthood documented by Operation Rescue. No further information about her condition is available.

However, much is known about another incident that took place on March 2, 2017, at a Planned Parenthood abortion facility in Virginia Beach, Virginia. 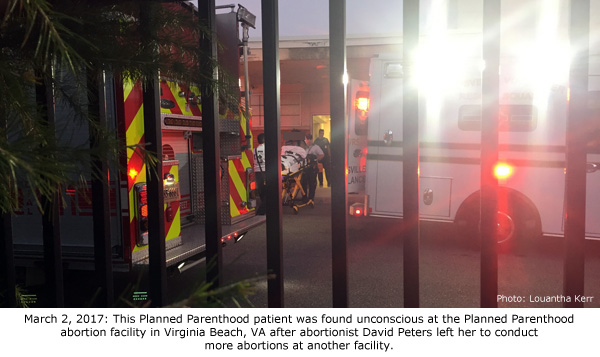 An ambulance and fire unit responded to a call placed at 5:49 p.m. for an unconscious African-American patient. The Planned Parenthood worker called for emergency assistance because there was no doctor on the scene.

Louantha Kerr, a prolife activist who photographed the incident, saw abortionist David Peters return to the Planned Parenthood facility just minutes after the ambulance arrived. He had left the abortion facility before all patients had been discharged so he could get to A Tidewater Women’s Health Clinic (ATWHC), an abortion facility in Norfolk, where more abortion patients waited. 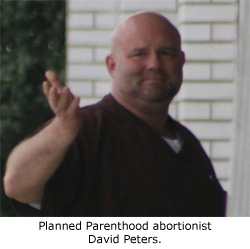 Shoddy practices appear to be habitual with Peters. In 2001, while in Brigham’s employment, Peters was charged by the Virginia Board of Medicine for prescribing drugs “outside of a bona fide practitioner-patient relationship, as required by law.” He further “authorized the prescriptions without obtaining a medical or drug history, performing a comprehensive physical examination, providing information about the benefits and risks…and without initiating additional interventions and follow-up care.”

It took the Virginia Medical Board six years to issue discipline. Peters was reprimanded for those violations and ordered to take supplemental education courses.

After the March 2, 2017, incident, Kerr lodged a formal complaint with the Virginia Department of Health concerning Peters and his hectic schedule that often leaves surgical abortion patients still in recovery without a physician present.

Kerr was notified by the Virginia Department of Health in a letter dated March 21, 2017, that an investigation was conducted and that her allegations were, in fact, substantiated. However, there would be no action taken against Peters because the Department found no “deficiency” in deserting surgical abortion patients before they were stabilized.

Operation Rescue released a chart last week detailing 37 known medical emergencies at Planned Parenthood abortion facilities since January 2016. The total is now to 39, including the death of Cree Erwin-Sheppard, who succumbed to a fatal uterine perforation received at the Planned Parenthood abortion facility in Kalamazoo, Michigan, on June 30, 2016.

Please contact your Congressman and Senators and urge them to completely defund Planned Parenthood.