You are here: Home / Abortion911 / Planned Parenthood Landed Abortion Patient in Hospital the Day Before Thanksgiving 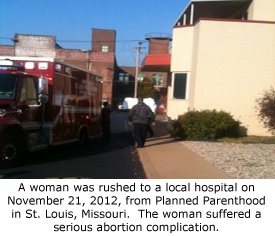 St. Louis, MO — A St. Louis Planned Parenthood patient was rushed to a nearby hospital after suffering serious abortion complications the day before Thanksgiving. Paramedics arrived at the abortion clinic at approximately 2:45 p.m. on November 21, 2012, and removed the patient from the building with her face covered with a cloth.

Mary Maschmeier of Defenders of the Unborn reported, “A counselor spoke to the brother of the injured woman and he said he thought she was going to be okay. We have made contact with him but have not received a returned call. We ask for your prayers for this woman and her family.”

“The carnage continues at Planned Parenthood abortion clinics, which are being artificially kept open through millions of dollars of local, state, and federal tax money. We are literally paying Planned Parenthood to hurt women,” said Troy Newman, President of Operation Rescue and Pro-Life Nation.

“Abortion clinics do everything they can to conceal incidents like this. The eighteen abortion injuries we know about are just a snapshot through a keyhole. More must be done to protect women from the incompetent services of shoddy abortionists who man these clinics nationwide. Americans must come to understand that when a woman walks into a Planned Parenthood abortion clinic, she is risking her health and her life.”