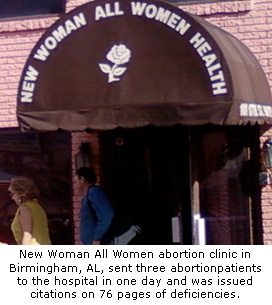 Birmingham, AL – A letter has been submitted to the Alabama Department of Health (ADPH) signed by national pro-life groups asking that the Department deny a pending license application to keep open the New Woman All Women abortion clinic that has been ordered closed by the state.

“We urgently need grassroots support for the permanent closure of this dangerous abortion clinic,” said Troy Newman, President of Operation Rescue and Pro-Life Nation. “We are asking pro-life supporters all over the nation to contact the Alabama Department of Public Health and ask that they deny the new license application and close New Woman All Women for good.”

On January 21, 2012, pro-life activists documented two women being carried from NWAW to ambulances waiting in a trash-strewn back alley. A copy of the 911 calls placed by clinic owner Diane Derzis were released to the public showing the women were overdosed by clinic staff. Pro-life witnesses filed complaints that resulted in the closure order after the ADPH inspected the abortion mill and discovered 76 pages of deficiencies, including documentation that a third abortion patient was sent to ICU that same day in January.

The letter, sent by Life Legal Defense Foundation, was also signed by Operation Rescue, Alabama Physicians for Life and CEC For Life. Among concerns listed in the letter is evidence that there is an improper affiliation between the new applicant, Ochata Management LLC and its agent Marianne Kelley Rain-water, and Diane Derzis, the current owner of the Birmingham abortion clinic.

Among the LLDF findings in public records:

“If the Alabama Department of Public Health allows this ‘shell game’ to continue, the LLDF will use all means necessary to make the ADPH abide by laws designed to protect women,” said Dana Cody, Executive Director of LLDF.

According to the consent order, the ADPH has until May 4, 2012 to approve a new license to operate the clinic, and if none is approved, the abortion clinic will be forced to stop all abortions by May 11, and cease all operations by May 18, 2012.

“We have been informed that a decision on this new application will be made soon. We must let the ADPH and Gov. Bentley know now that we cannot tolerate this charade that will allow the abortion business to continue with essentially the same players in the background still running what has been proven to be a dangerous abortion operation. The clinic must be closed in order to protect women from suffering the fate of the three women who were hospitalized in January,” said Newman.