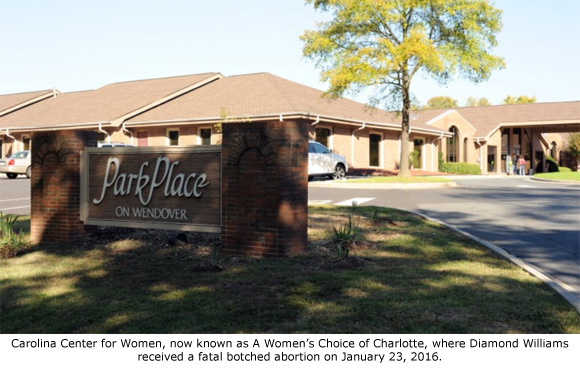 Charlotte, NC – When Diamond Williams died in 2016 from complications to an abortion she received at the Carolina Center for Women, (now known as A Women’s Choice of Charlotte), she certainly was not the first to have endured a medical emergency as a result of a botched abortion at that facility — and she also wasn’t the last.

Operation Rescue has obtained twenty Incident Reports from the Charlotte Fire Department related to 911 calls placed from the abortion facility, located at 421 N. Wendover Road in Charlotte, North Carolina. Even though the reports lack much detail, it is obvious that medical emergencies occur at A Women’s Choice of Charlotte on a regular basis.

Fifteen of the emergency calls requested EMS services. They indicate that emergency medical services or other kinds of assistance were rendered. One of the reports indicated that there was a medical incident in the parking lot, but it was specified that it was not related to a vehicle accident.

Five of the Incident Reports indicated that units were dispatched to the abortion business, but the request for assistance was cancelled en route. This appeared to related to a medical problem that a patient was experiencing at the abortion facility, but was somehow brought under control before the ambulance could arrive.

While it is unknown how many of these incidents involved abortion-related medical issues, it is a good bet the most of them were.

“It is fairly rare for a 911 call from an abortion facility to be related to something other than an abortion problem, although it does happen from time to time,” said Operation Rescue President Troy Newman. “With this many incidents, there odds are that the vast majority were related to abortion emergencies.”

And such calls for emergency assistance at this particular abortion facility appear to be on the rise.

The number of 911 calls increased to five in 2017, with three women actually receiving emergency medical care.

The 2016 ambulance call for Diamond Williams is not reflected in the Incident Reports because it was placed by her family from their home.

“We have to wonder how many other women have been hospitalized due to botched abortions that took place at A Women’s Choice of Charlotte that weren’t transported directly from the abortion facility,” said Newman. “It is clear that this facility had harmed women and continues to harm women who receive abortions there.”

One abortionist known to work at A Women’s Choice of Charlotte is Jodell K. Allen, who has also been employed by Planned Parenthood in several states. Whether she was involved in William’s fatal abortion or any of the medical emergencies described in the Incident Reports is unknown.