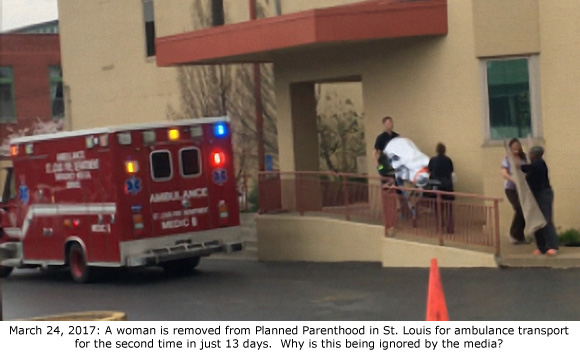 St. Louis, MO – While the main stream media looks the other way, Planned Parenthood abortion facility in St. Louis has sent hospitalized another woman on March 24, 2017 – just an 13 unlucky days after its last medical emergency on March 11.

This represents the 65th documented patient hospitalized with abortion complications by Planned Parenthood in St. Louis since 2009.

“We consider this the most dangerous abortion facility in the U.S.” said Operation Rescue President Troy Newman. “If any other medical office in the country was calling for emergency assistance for patients as often as this facility is, it would be a public scandal. Investigative reporters would be falling over themselves trying to expose this safety crisis. But since abortion is involved, there is not one word from the media. Their silence is enabling this dangerous abortion business to continue the carnage of babies and mothers alike.”

A photograph of the incident was taken by a member of the Coalition for Life St. Louis during a 40 Days for Life prayer vigil. The picture was snapped moments before Planned Parenthood workers deployed tarps, known as the “Sheets of Shame,” to block pro-life supporters from documenting the emergency.

The photo showed a woman on a gurney who was completely covered with sheets as she was removed from the notorious Planned Parenthood abortion facility for emergency transport.

Health Department records show that conditions at the St. Louis Planned Parenthood are also deteriorating along with patient care standards.

In January, Operation Rescue reported on five Statement of Deficiency Reports that showed Missouri state inspectors have cited the Str. Louis Planned Parenthood for 39 classes of violations involving 210 incidents – 53% (111) of which were related to failure to provide a safe and sanitary environment. [Read the full report.]

Those Deficiency Reports indicated that from 2013 through 2016, the violations at the St. Louis Planned Parenthood abortion facility have become more numerous and serious, including failure to properly clean the facility or properly sterilize surgical instruments used on patients.

“The failure of Congress to defund Planned Parenthood last week only ensures that more women will suffer and possibly die due to shoddy abortion facilities like the St. Louis mill, which will continue to prey on vulnerable pregnant women,” said Newman. “Congress needs to get down to business and figure out a way to defund Planned Parenthood now, as they promised the American people they would do.”

With the pro-abortion news media covering up for Planned Parenthood’s widespread abuses – including a flood of patient injuries and safety violations – not much is likely to change at Planned Parenthood without Congressional action.