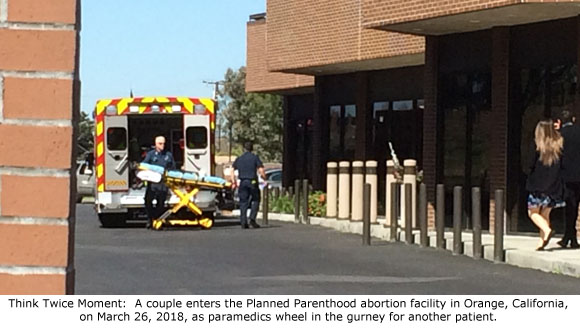 Orange, CA – Just four days after an ambulance transported a Planned Parenthood patient just before dawn on March 22, 2018, an ambulance was called for yet another woman who required emergency transport to a hospital.

Pro-life activists on the scene snapped photos one couple entered the Planned Parenthood building just as the paramedics pushed a gurney into the abortion facility, located on Tustin Avenue in Orange, California.

“Nothing says ‘think twice’ like an ambulance outside an abortion clinic,” said Troy Newman, President of Operation Rescue. “Two ambulances in four days is a very bad sign that there may be ongoing serious problems inside that abortion facility that are placing women in grave danger.”

This facility was involved in supplying aborted baby body parts to DaVinci Biologics and DaVinci Biosciences, which in turn sold the human remains worldwide. The DaVinci companies were sued by the Orange County District Attorney’s office for illegally profiting from the sales.

The DaVinci companies admitted guilt, paid $7.8 million in a settlement, and agreed to stop doing business in California.

The DaVinci companies were owned by Ecuadorians who were convicted of financial crimes in their home nation, then paid large contributions to Democrats in the U.S. that resulted in then-Secretary of State Hillary Clinton expediting their immigration into the U.S.

However, the House Select Investigative Panel on Infant Lives, which investigated the illegal trafficking of aborted baby tissue and organs for profit, issued criminal referrals for the DaVinci companies, but had not yet obtained evidence Planned Parenthood of Orange and San Bernardino Counties was paid by the DaVinci companies. The Panel’s term ended before their investigations were complete.

“Planned Parenthood of Orange and San Bernardino Counties were the sole supplier of aborted baby parts to DiVinci Biologics and DaVinci Biosciences, which were owned by convicted criminals who had help from the Obama/Clinton administration in escaping an eight-year prison sentence in Ecuador,” said Newman. “Other Planned Parenthood organizations in California and other states were referred to the U.S. Department of Justice for criminal investigation and prosecution for multiple crimes related to the illegal sale of aborted baby remains. We hope the DOJ investigation will find the missing financial link between the Orange County Planned Parenthood and the DiVinci companies. Shutting that abortion business down would be the best thing that could happen for the safety of babies and their mothers.” 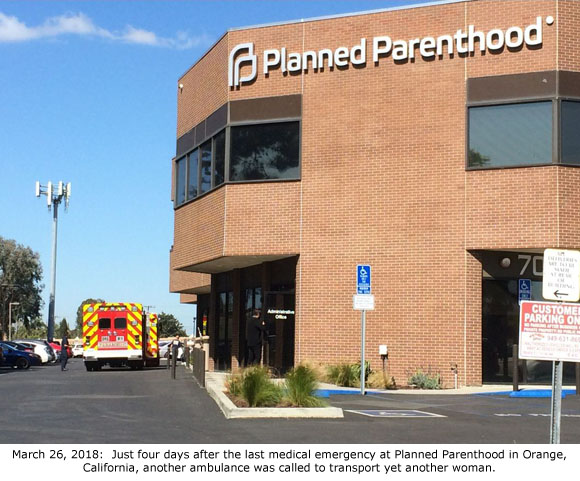