You are here: Home / Abortion911 / She Walked into Planned Parenthood Yesterday, but She Didn’t Walk Out

Annapolis, MD – She walked into a Planned Parenthood abortion facility yesterday morning, but she didn’t walk out.

An ambulance was called on the morning of Tuesday, October 4, 2016, for a hemorrhaging patient at the Planned Parenthood clinic in Annapolis, Maryland.

Local pro-life activist Pamela Palumbo provided Operation Rescue with photos and video within minutes of the incident that showed female patient being removed from the abortion facility on a gurney. She was then transported to a nearby hospital.

A radio traffic recording made by Anne Arundel County Police, Fire and EMS was immediately obtained by Operation Rescue.

The recording revealed that units, including an ambulance, were dispatched to Planned Parenthood, located in the Mason Building on West Street in Annapolis at about 11:08 a.m. in response to a hemorrhage.

This is the second documented medical emergency at the Annapolis Planned Parenthood this year. Another woman was transported to the hospital on Tuesday, January 5, 2016. The injuries suffered by that patient are unknown due to heavily redacted 911 records.

On February 19, 2013, the Annapolis Planned Parenthood failed its initial licensing inspection after an inspector documented improper sterilization of surgical instruments in a leaky sterilization machine. The facility was granted a license anyway.

Inspectors did not return to Planned Parenthood for nearly 2½ years. In July, 2015, the facility was found by some stroke of luck to be in compliance with Surgical Abortion Facility requirements.

“I have seen so many pictures of ambulances at abortion clinics that I lost track long ago,” said Troy Newman, President of Operation Rescue. “It is time for regulators to take their jobs more seriously and protect the public from being injured, maimed, and even killed at American abortion facilities, as we have seen happen all too often. Right now, women are fodder for exploitation and harm by unscrupulous, profit-centered abortion businesses. Enough is enough!” 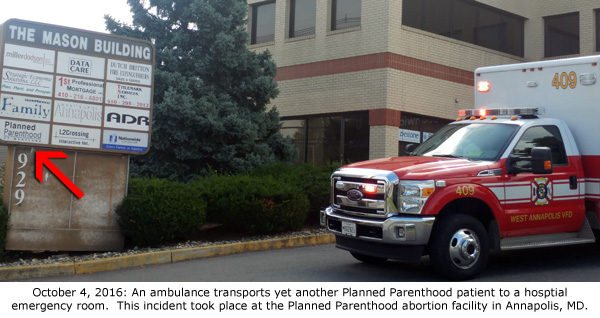