You are here: Home / Abortion911 / Shock 911: One Patient Assaulted, Another Hospitalized at Notorious California Abortion Facility

Emergency 911 recordings and CAD transcripts show that a 911 call was placed by an FPA employee, at 9:42 a.m. complaining of a patient that has arrived on a motorcycle with a friend, who was “flipping out like crazy” and throwing a helmet around. When the caller could not answer the dispatcher’s questions, another woman, identified as “Maria,” the clinic manager, took the phone.

But Maria was surprised to learn she was speaking to a 911 dispatcher and was troubled that the conversation was being recorded. She did not want to answer further questions, but still requested police to respond to handle a patient who was having anxiety and causing issues for the staff. Maria requested that police escort the patient out of the clinic.

Maria finally indicated that the woman, who she described as a patient, was accompanied by another person. Abortion patients are required to bring another person along to their appointment to drive them home after the abortion procedure.

Five minutes later, a second 911 call was placed by the patient herself, who was sobbing audibly and sounded very upset. She reported that she was assaulted otherwise mistreated by the FPA staff.

“They are being very mean and pushing me around and telling me they are going to call the cops on me, so I am calling the cops on them,” the sobbing woman explained. She said that clinic employees had pushed her “out of the room” and “tossed” her belongings at her, then pushed her into the lobby of the clinic.

“They cut my arm. They held my head down, and I was hurt,” she sobbed.

Moments later, FPA manager Maria called the Bakersfield police non-emergency number, which she mistakenly thought would not be recorded. Maria again insisted on a police response, this time with “lights and sirens.”

Maria described how the staff had locked the door between the downstairs lobby and the rest of the clinic where the employees were. “She could hurt our staff,” Maria said, with as much drama as she could muster.

But the dispatcher wasn’t buying it.

“How can she do that if she’s in the waiting room and you guys are locked in?” asked the policewoman who fielded the call.

Police were finally dispatched at 10:30 a.m., according to the Computer Aided Dispatch printout that Operation Rescue received with the recordings. The situation was resolved by 11:00 am.

It is believed that the patient did not have an abortion that day. As she was leaving the facility, pro-life activists overheard her tell her friend, “I’m so scared,” and, “This place is evil.”

But the bedlam that erupted inside the abortion facility as the result of staff mistreating her may have caused the staff to be distracted, because later in the day, an ambulance was called for another patient who was suffering a medical emergency.

This time, instead of dialing 911, which is the quickest way to get help, clinic staff called Hall Ambulance, a private ambulance company not subject to FOIA requests. There was no record of an emergency call related to the November 5 medical emergency on file with the Bakersfield Police or Fire Department.

After the ambulance arrived, FPA staff emerged from the facility with sheets, which were held up to block Palmquist’s view as she recorded the incident.

A patient was loaded into the ambulance for transport to a local emergency room. It is believed that the abortionist on duty that chaotic day was William Ramos, from the A to Z Women’s Center in Las Vegas, Nevada. Ramos has a history of multiple malpractice judgments against him as well as disciplinary actions.

The Bakersfield abortion facility has had a difficult time keeping an abortionist on staff. Two other California abortionists, Karen Mann and Alexander Simopoulos, both stopped working at the facility after medical emergencies they were involved with became public.

This is the twelfth medical emergency documented at the Bakersfield FPA abortion facility since August 2012.

“FPA seemed more worried about being exposed than they were about the woman experiencing a possibly life-threatening medical emergency. That abortion facility would rather delay medical care to an suffering woman that fall under the scrutiny of Operation Rescue and the public,” said Troy Newman, President of Operation Rescue. “After a dozen seriously injured patients and another who was obviously distraught by staff mistreatment, it is clear that the Bakersfield FPA poses a certain danger to women and should be shut down in order to protect the public.” 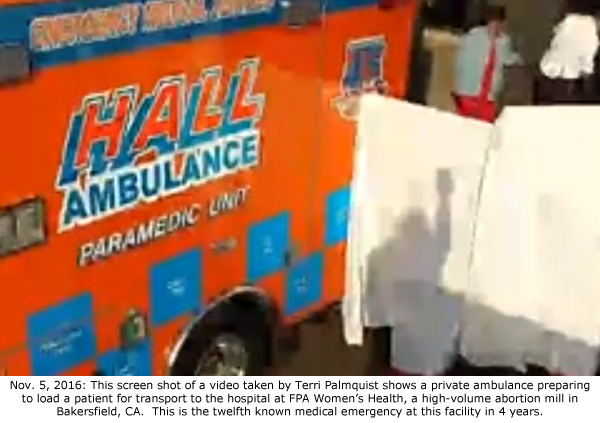