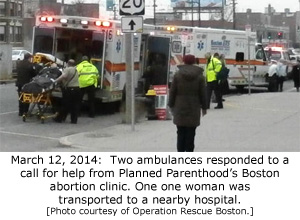 Boston, MA – Pro-life activists photographed two ambulances responding to a medical emergency at Planned Parenthood in Boston, Massachusetts, on Wednesday, March 12, 2014. A patient was loaded into one of the ambulances and whisked away to a local hospital for emergency care.

During the incident, which was reported by Operation Rescue Boston, additional responders descending upon Planned Parenthood included a third EMT vehicle, a fire truck, and at least two Boston Police cruisers.

Bill Cotter of OR Boston reported that a “well-placed source” informed him that the woman “suffered an allergic reaction to an anesthetic.”

It is unknown whether the reaction was experienced before or after the abortion took place.

“It is outrageous that Planned Parenthood abortion clinics continue to injure women and kill children while masquerading as a legitimate health care provider,” said Troy Newman, President of Operation Rescue. “Because Planned Parenthood receives over a half-billion dollars of tax-payer funds each year, this kind of quackery is indefensible. We renew our call to defund Planned Parenthood of all tax money, which is all that is keeping most of them open. If we want to stop abortion from hurting women and killing babies, pulling their public funding would probably do the trick.”

In separate incidents, pro-life activists documented ambulances transporting women from this same Planned Parenthood abortion clinic on September 5, 2012, July 7, 2012, and January 7, 2011. It is highly likely that more medical emergencies than this occurred at this location outside the presence of pro-life supporters.

Planned Parenthood of Boston has been the subject of lawsuits and other actions. Operation Rescue has acquired dozens of documents reflecting their problems that can be viewed at AbortionDocs.org.

Click to read about other abortion-related medical emergencies reported by Operation Rescue.