Stamford, CT — For the second time this year, an ambulance was dispatched to the Stamford Health Center Planned Parenthood, an abortion facility located in Stamford, Connecticut.

The incident occurred soon after a group of pro-life activists had left for the day. However, one activist remained in the neighborhood running errands when he happened to notice an ambulance headed in the direction of the Planned Parenthood center.

He returned to the street to pray for whoever needed assistance until the ambulance left, which was followed closely by a private vehicle that had been parked in the lot. No lights or sirens were used.

A radio dispatch recording obtained by Operation Rescue revealed that an ambulance and a rescue unit had been dispatched using the Delta priority designation, which is a non-life threatening priority code that does not require the use of lights and sirens.

The subject was a 29-year old female who had lost consciousness, but was breathing normally. It is assumed she was transported to a nearby hospital.

Since then, Operation Rescue has documented a total of 48 medical emergencies at Planned Parenthood abortion facilities since January 2016 – twenty-one of which took place within the first five months of 2017.

“Whether it is a minor condition or a life-threatening abortion complication, the public need to be aware that ambulances are being summoned to Planned Parenthood abortion facilities at an alarming rate,” said Troy Newman, President of Operation Rescue. “Planned Parenthood’s inability to guarantee the safety of their patients and the fact that their facilities are ill-equipped to handle even a minor incident, provided an urgent reason to stop propping up Planned Parenthood with our tax money.

Please contact your Senators and demand that they immediately #DefundPlannedParenthood.
Pick your state at this link for contact information. 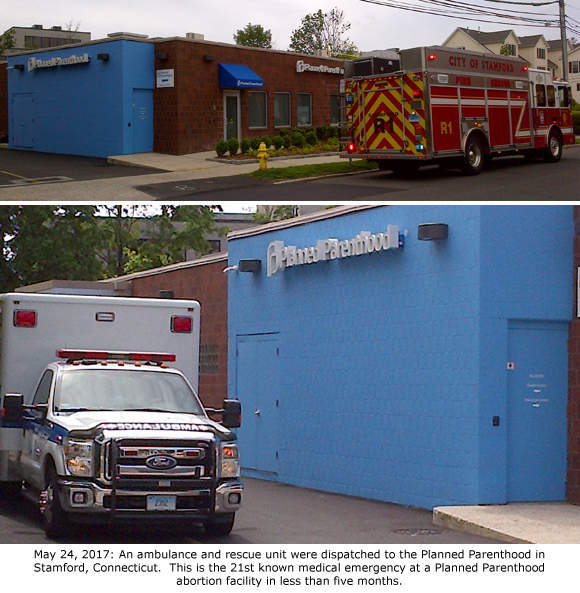