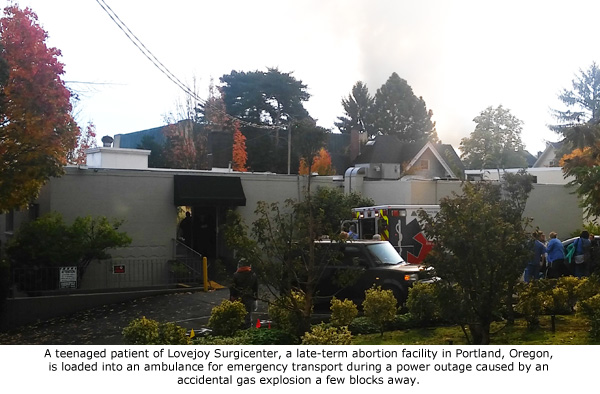 Portland, Oregon – As smoke billowed from an accidental gas explosion a few blocks away, an ambulance arrived at a late-term abortion facility in Portland, Oregon, to transport a patient to a hospital emergency room. The incident took place on October 19, 2016.

The misnamed Lovejoy Surgicenter conducts abortions “through 23 weeks or occasionally longer on a case-by-case basis,” according to its website. This makes the Lovejoy Surgicenter one of 40 abortion facilities in America that openly do abortions at 24 weeks or later. Late-term abortions pose significantly higher risks to women than the first trimester variety.

The gas explosion took out power to the Lovejoy Surgicenter abortion facility and surrounding area. During the outage, pro-life activists snapped photos as emergency responders loaded a young patient, who appeared to be 15 or 16 years old, into the ambulance. Whether or not she was a late-term abortion patient is unknown at this time.

“It’s possible the woman may have been in the middle of an abortion when the power went out and caused complications, but we don’t know for sure,” said Nancy Witt of 40 Days for Life in Portland.

“It appears that Lovejoy had no emergency back-up power source. This is a dangerous safety deficit that has the potential to place women in life-threatening conditions,” said Operation Rescue President Troy Newman. “It is obvious that Lovejoy – like the vast majority of abortion facilities in America – lacks the ability to properly treat a vulnerable patient in the event of medical emergencies that routinely plague the abortion industry. They would rather take a chance with a patient’s life than have proper safety equipment and protocols in place.”

But aside from the dangers of unprepared abortion clinics conducting surgeries without power back-ups, witnesses at the scene were troubled by another disturbing development. 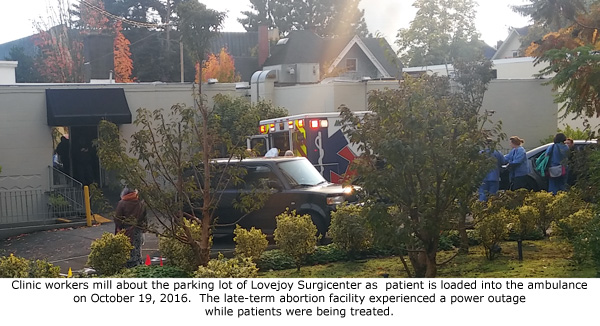 Witnesses told Operation Rescue that the teenager had been brought to the abortion center by a suspicious-looking older African-American man, raising concerns that the girl may have been the victim of sex trafficking.

Abortion facilities are required to report suspected child sex abuse to the authorities, but often, abortion businesses across the nation have shown the propensity to ignore such reporting laws in favor of protecting the abuser.

In 2012, a former employee at Lovejoy filed suit alleging that Lovejoy’s female nurse molested patients while they were under anesthesia and sexually harassed other female employees. The nurse was fired only after the abuse became public.