St. Louis, MO — Exactly two weeks after a medical emergency at the St. Louis Planned Parenthood abortion facility sent a woman to a hospital emergency room, another ambulance was called to the same facility to treat yet another patient.

This makes brings the total of documented medical emergencies at Planned Parenthood’s St. Louis abortion business to 62 in under seven years.

“Planned Parenthood is hospitalizing an average of around nine women per year. That outrageously high number is a symptom of obvious incompetence within that abortion facility,” said Troy Newman, President of Operation Rescue. “The Health Department is well aware of what is going on at Planned Parenthood, but has chosen to protect the abortionists rather than the vulnerable women who are suffering live-threatening injuries there.”

According to Mary Maschmeier, President of Defenders of the Unborn, the ambulance arrived at Planned Parenthood at approximately 2:30 p.m. on November 2, 2016. Emergency responders were inside the facility with the patient for about 20 minutes before walking her out to the ambulance and transporting her away from the clinic.

Abortionist Colleen McNicholas settled a medical malpractice case* last July a “minor amount.” That case was brought by a family of a baby that appears to have been injured during a delivery. McNicholas, who is based in St. Louis, travels about the Midwest conducting abortions at a number of facilities.

“Watching this constant parade of injured women who must be take away in an ambulance more than disturbing,” said Newman. “But what is worse is the political climate in St. Louis and the nation as a whole that protects Planned Parenthood from the consequences of their actions, which are injuring and killing women at an alarming rate. We must work through every available legal avenue to bring Planned Parenthood’s network of political corruption to an end. We have our work cut out for us.” 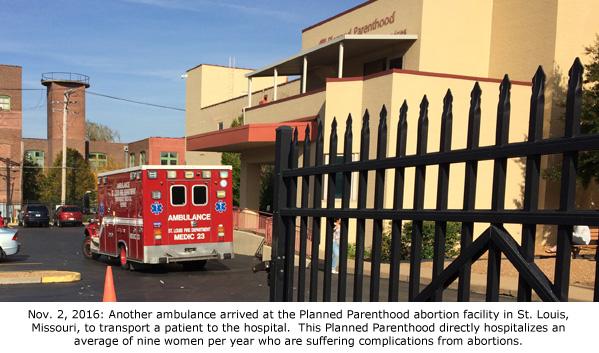