Fire Department paramedics entered the Planned Parenthood office with a rolling stretcher, but soon returned it empty to their ambulance unit. Later, the patient was taken out to the sidewalk in front of Planned Parenthood where she was seen signing papers for the paramedic team after she refused ambulance transport. 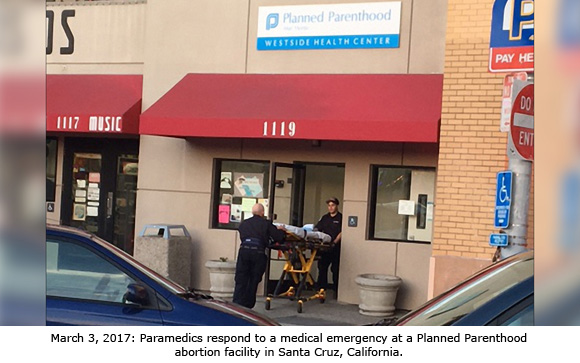 While this woman’s condition was apparently not life-threatening, other women have not been so fortunate.

Some women who have died from Planned Parenthood abortions in recent years include:

Other women have been hospitalized suffering from hemorrhaging, seizures, and other serious medical issues. (Watch a video revealing 18 medical emergencies at Planned Parenthood since January 2016.)

“Whether women are injured a little or a lot, Planned Parenthood poses a very real danger to women,” said Troy Newman, President of Operation Rescue. “I’m tired of reading autopsy reports and listening to 911 calls about women who are bleeding out, in cardiac arrest, or suffering some other horrible injury. Abortion is immoral because it takes the innocent lives of precious babies and because it causes harm – sometimes deadly harm — to the mothers. The barbaric practice of abortion must be abolished once and for all.”