Columbus, OH – Created Equal has released a video containing footage taken on the scene of medical emergency at a Planned Parenthood abortion facility in Columbus, Ohio, that also features audio from the actual 911 call for help placed by a Planned Parenthood employee, which downplayed the seriousness of the patient’s condition.

The incident, which took place on October 9, 2015, involved a woman who was in the middle of a yet-to-be-completed late-term Dilation and Evacuation dismemberment abortion when she began to bleed and an her blood pressure dropped to dangerous levels, according to the 911 records obtained by Created Equal.

But this abortion-related injury is just one of estimated thousands that take place each year at Planned Parenthood and other abortion facilities in the U.S.

“Last week, Planned Parenthood tried to paint pro-lifers as violent with a charge to the nation to #InvestigateClinicViolence. While we found this opportunistic effort to score political points in the wake of the Colorado tragedy deplorable, Created Equal has indeed long documented the primary violence inside abortion clinics—dismembering preborn humans,” said Mark Harrington, National Director of Created Equal.

Operation Rescue joins with Created Equal in calling for serious investigations into the life-threatening injuries and abortion-related deaths that take place at Planned Parenthood and other abortion facilities on an all-too regular basis.

“We encourage the House Select Committee on Planned Parenthood to investigate this subject,” said Operation Rescue President Troy Newman. “Operation Rescue has documented hundreds of abortion-related injuries, complications, and deaths over the years, and that’s just the tip of the ice burg. Based on our research, these incidents are occurring with shocking frequency, yet no one wants to talk about this grisly violence at abortion clinics. Women enter abortion clinics are told they will receive ‘quality health care,” but have no idea that they may end up in a hospital fighting for their lives or even on a cold slab in the morgue.” 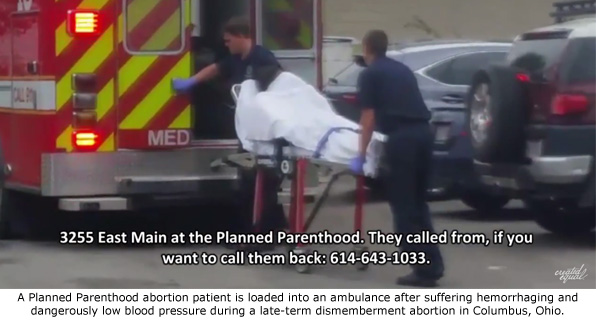 The new video shows one woman who recently walked into Planned Parenthood in Columbus for an abortion and was wheeled out with a sheet over her head.

An excerpt from the 911 call indicates that the late-term dismemberment abortion was not complete when things went horribly wrong.

“We have a patient who is inter-op, having an elective D&E and we have a little bit of a bleed,” said the caller, who identified herself as Tracy, a nurse at Planned Parenthood. “We have pretty much the bleeding under control but her blood pressure is low.”

“Yes, Planned Parenthood, we will #InvestigateClinicViolence! We will investigate your daily decapitation, dismembering, and disemboweling of little boys and girls. We will investigate your botched abortions leading to sterility and even death of adult women. Abortion is never safe for the babies you kill. And it is dangerous for mothers, too,” said Harrington.

Another case that emphasizes the violence at abortion clinics is the death of abortion patient Tonya Reaves at a Chicago Planned Parenthood facility in 2012. Reaves received a second trimester abortion similar to the one experienced by the injured patient in Columbus. Planned Parenthood’s abortionist, Mandy Gittler, stabbed a hole in Reaves’ uterus then delayed calling for emergency help until it was too late. Reaves died from her injuries, leaving her young son motherless.

Operation Rescue has documented 25 abortion-related medical emergencies at Planned Parenthood facilities alone so far in 2015, where the most common of the life-threatening complications included hemorrhage and perforated uteri. However, those are only a small fraction of total abortion complications that occur since many result in hospitalization after the women have left the abortion facilities. Official reporting of annual abortion complications and maternal deaths is spotty and unreliable.

In Texas, documents from a recent court case that is now headed to the U.S. Supreme Court indicated that about 1,000 women are hospitalized with serious abortion complications each year in that state alone, giving a better glimpse into serious maternal injuries that actually occur during violent abortion procedures.

“We cannot condone violence at abortion clinics in any way shape or form and will continue to work through peaceful means to demand investigations and enforcement of the law in order to stop the violence against women and children that takes place at Planned Parenthood and other abortion clinics daily,” said Newman.

Please post this story to social media under #InvestigateClinicViolence and help inform the public of the documented violence that takes place inside abortion clinics that is regularly hurting and killing women and babies.