On April 7, 2017, an ambulance was called to Planned Parenthood for a 22-year old who was bleeding so severely that she needed emergency hospital care. Pro-life supporters snapped photos as an African American woman was wheeled out the Planned Parenthood’s back door and into an awaiting ambulance. 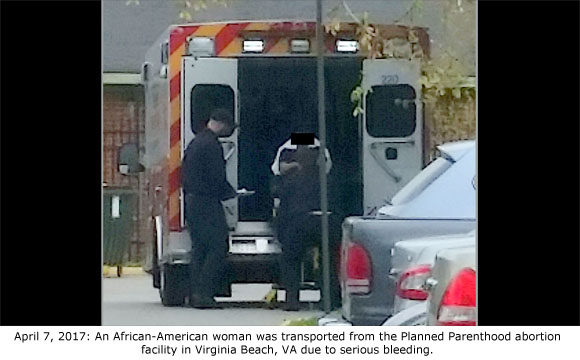 An earlier incident took place at this same Planned Parenthood facility on March 2, 2017, when an unconscious African-American patient was transported to a nearby hospital.

The most recent emergency represents the 15th time that a Planned Parenthood patient has been transported for urgent medical care that the abortion facility was unequipped to provide.

Overall, it is the 26th documented emergency at any abortion facility nationwide so far this year.

The abortionist on duty during the April 7 incident was an unknown female provider who has an aversion to being photographed.

“We are reporting on these abortion-related injuries too often — sometimes several times per week. How many more women must suffer life-threatening injuries or death before America wakes up and realizes that the brutal and violent process of abortion hurts women and kills their babies,” said Troy Newman, President of Operation Rescue. “We urge Congress to move swiftly to defund Planned Parenthood as soon as possible, and stop our tax money from benefiting a business that maims women and destroys the lives of innocent babies.”