Cleveland, OH – As the wail of approaching sirens grew louder, those on both sides of the abortion battle readied themselves for action.

Pro-life activists praying on the sidewalk on March 24, 2018, outside of Preterm, a high-volume abortion business in Cleveland, Ohio, readied their cameras and prepared to document yet another medical emergency at that facility – the twelfth such known incident since 2010. Meanwhile, clinic employees and escorts positioned themselves to disrupt attempts to document the incident.

As the gurney bearing the woman requiring emergency assistance emerged from the carport under the building, both sides shifted into action.

One clinic worker in blue scrubs bumped and blocked 83-year old pro-life activist Frank Kosmerl as he attempted to film the incident. Despite her attack on Kosmerl, he was able to capture creepy footage that showed a woman on the gurney in the seated position with an eerie black sheet draped over her head. 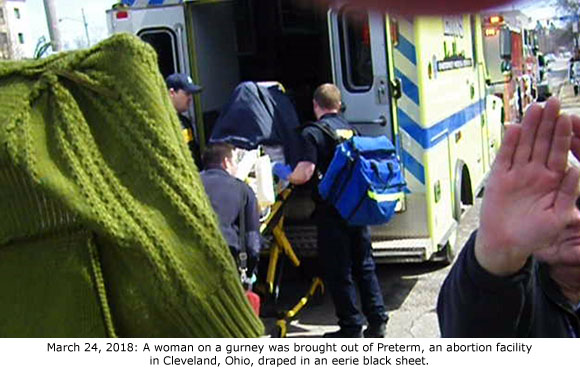 Once the woman was loaded into the ambulance, the clinic worker turned to Kosmerl and made two angry obscene gestures.

“Battering Mr. Kosmerl wasn’t done to protect the woman’s identity because she was covered in a black sheet. It was done to punish him for trying to record Preterm’s obvious abortion complication,” said Operation Rescue President Troy Newman. “It’s pretty ironic that the clinic worker would make obscene gestures at the pro-life activist as if he was at fault, when it was actually Preterm that harmed a woman so seriously she had to be hospitalized.”

Despite is advancing age, Kosmerl was unfazed by his rough experience with the angry clinic worker. He hoped that others would see his dedication and realize the need to join him on the sidewalk at Preterm to pray and offer help to abortion-bound women.

Cleveland activists also reported to Operation Rescue that a similar medical emergency had occurred at Preterm just days before, on March 17, 2018. However, no one had the ability to snap a picture as that Preterm patient was transported by ambulance.

In 2014, LaKisha Wilson died after a seriously botched abortion at Preterm. Despite a unified call for justice by state and national pro-life leaders, there were never any disciplinary consequences imposed on Preterm or its staff.

Last year, Preterm made headlines by posting 16 billboards around Cleveland with slogans like “Abortion is a Blessing.”

“I doubt if LaKisha Wilson’s young son, who was left motherless after her death, would agree that his mom’s abortion was a blessing. And I doubt if the women hospitalized over the past few days would think their abortions were blessings, either,” said Newman. “This Preterm has proved over and over it poses a danger to the community and should be permanently closed.”