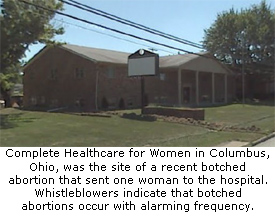 Columbus, OH – Last month, as she has so many times before, a pro-life sidewalk counselor saw a young woman leaving Complete Healthcare for Women, an abortion clinic in Columbus, Ohio, after an abortion. But this time, the patient swooned, dropped to her knees, and began to vomit as she bled heavily through her clothing.

At the emergency room, she was treated for heavy bleeding, and given medication for her dizziness and nausea. It took emergency medical professionals six hours to stabilize her.

Transcripts show that her abortion was done by “Dr. Samuel.” Abortionists known to be employed by Complete Healthcare for Women (CHW) are Milroy J. Samuel and Mervyn J. Samuel.

“Thankfully, a sidewalk counselor was present to assist this woman and get her the medical care she needed. We hesitate to think what would have happened to this abortion patient if no one had been there to help her,” said Operation Rescue President Troy Newman.

A second abortion patient, also 19 years old, was also recently admitted to a Columbus hospital after suffering excessive bleeding and pelvic pain after her abortion at Capital Care Clinic in her tenth week of gestation. According to her transcripts, she suffered from a hematoma, or internal bleeding inside the tissues, and excessive clotting. Efforts by hospital staff to contact the clinic were unsuccessful.

“It is our understanding from conversations with sidewalk counselors and our confidential sources in Ohio that abortion patients in Columbus end up in the local emergency rooms with alarming frequency. Our whistleblower says that these two incidents are just the tip of the iceberg. The true number of abortion complications is hidden from the public. Abortion is not as safe as the abortionists want you to think and it now appears that complications that require emergency hospitalization have reached epidemic proportions,” said Newman.

“The fact that these two incidents originated at more than one abortion mill shows that out-of control abortion complications are systemic. Oversight agencies have failed in their duty to protect the public from abortion abuses, so we are compelled to blow the whistle on them for the sake of women who have been misled about abortion and its safety. We could be looking at many more ‘shop of horrors’ similar to what we have seen uncovered by inspections in other states.”

Even CHW’s own web site indicates that medical emergencies occur as a matter of routine:

We try our very best to stay on schedule, although emergencies sometimes arise. If we are seriously delayed, we will attempt to notify you as soon as possible. Occasionally, we may call patients in the waiting room out of turn if they have an emergency. We ask for your patience if you have to wait.

Operation Rescue has encouraged the sidewalk counselor, who wishes to remain unnamed, to file complaints with the Medical Board of Ohio against the two clinics and all abortionists involved. Similar complaints filed in other states have resulted in license revocations, clinic closures, and other disciplinary action against abortionists.

“This emphasizes the need for a continuous presence of pro-life activists outside every abortion clinic across the nation,” said Newman. “Not only can pro-lifers can dissuade women from abortions and save the lives of pre-born babies, but they also could witness abortion abuses that could ultimately lead to the closure of the clinic.

“Since the authorities so far have done little to protect the public from abortion abuses, it becomes the duty of the people to expose the abuses and compel the authorities to act shut down these dangerous abortion mills.”