You are here: Home / Abortion911 / Woman Codes after Botched Abortion But Clinic Said She Was “Good to Go”

Bellevue, NE – A 35-year-old woman who suffered a botched abortion at a facility in Bellevue, Nebraska, coded at least once at the Nebraska Medicine Main Campus in Omaha, Nebraska, and underwent four hours of emergency care.  This was after the abortion facility where she was injured told 911 that the woman was “stable” and “good to go.”

Initial information about the abortion emergency came from a source that wishes to remain anonymous.  Operation Rescue was tipped to news of the emergency and immediately ordered 911 records that confirmed important details of the informant’s story, such as the date and age of the injured woman. [See CAD.]

There was no pro-life presence at the C.A.R.E abortion facility at the time of the emergency.  That facility is owned and operated by the nationally known late-term abortionist LeRoy Carhart.

It all started when Eugene from Omaha, who is a volunteer with 40 Days for Life, was praying alone on the sidewalk outside the Bellevue abortion facility on Wednesday, March 2 – Ash Wednesday – when a person joined him.  After a short prayer, the person began to share with Eugene that there had been a 35-year-old woman at the hospital on February 25 who had been injured during abortion at the C.A.R.E. facility.  According to that person, the woman was “worked on” for four hours by hospital doctors and coded at least once.  The person familiar with the incident gave no details about specific injuries the woman received.

However, Eugene spoke to Operation Rescue and noted that the witness told him, “They let her lie there too long” at the clinic before calling 911.  The person was unsure if the woman managed to survive her life-threatening ordeal.

According to the 911 records, a Carhart employee called requesting an ambulance for a female patient.

Caller:  Um, so I actually am with a patient.  We are the abortion clinic here in Bellevue, Nebraska.  We have a patient who needs to be transported.  She is in stable condition.  Everything is good to go.  She has no bleeding, but she’s having issues with – um – passing out.  And we just want to have her transported to [REDACTED] just to be safe.

Caller: — On room air. Vitals are stable.  Everything is good.

Up to this point, just listening to the 911 recording, it sounded like it was a relatively minor incident involving a fainting woman.  But in fact, everything was not good.

The CAD noted that the woman “had a procedure so has cramping,” and that she was “completely alert” and was “not changing color.”  There was no mention on the CAD of any bleeding because the caller indicated that there was none.

It now appears that little of that information was completely accurate.

Caller: She’s awake as long as she’s laying down and her feet are elevated.  It’s just when she sits up that she passes out.

Caller:  Um, she only changes color when she sits up.  It’s like she loses all color.  She just turns white, and then when she lays down, the color comes back.

Even though the caller told the 911 dispatcher that there was no bleeding, the woman’s symptoms were consistent with massive blood loss.  While other conditions may be possible, a woman who has just and an abortion and is losing consciousness is most likely hemorrhaging.

There are physiological things that happen to a person as blood loss worsens.

At first, a person might feel fine or maybe a bit dizzy.  By the time someone loses 15-30 percent of their blood volume, the heart rate increases as it attempts to compensate for the decrease in blood.  Other symptoms a person might experience with this level of blood loss could include nausea, heavy breathing, paleness, anxiety, weakness, and the sensation of being cold.

After losing 30 percent of the body’s total blood volume, it is likely one will lose consciousness, and require a blood transfusion to become stable.

When blood loss reaches 40 percent, the person is in real trouble without immediate emergency help.  This amount of blood loss can lead to pulmonary and/or cardiac arrest and possibly death.

“Knowing that this woman coded at the hospital, when I heard the caller tell the 911 dispatcher that all the patients’ vitals were normal and there was no bleeding, it did not ring true,” said Newman.

This emergency comes as Carhart battles two major medical malpractice suits in Maryland, where he operates a full-term abortion facility.  Both cases involve women who suffered internal injuries, including perforated wombs, and retained fetal tissue during second trimester abortions in May 2020.  These lawsuits are both active and seeking hefty monetary damages.

Carhart has since halted surgical abortions in Maryland, opting to only dispense abortion pills for the time being.  Surgical abortions were halted at his Bellevue, Nebraska, facility for a short time late last year but soon resumed.

Since 2012, Operation Rescue has documented 27 women who were hospitalized after suffering abortion complications at clinics where Carhart worked.  That includes the abortion-related death of Jennifer Morbelli in 2013, but not the death of Christin Gilbert, 19, who succumbed to a botched third trimester abortion in 2005, while Carhart was working at a late-term abortion facility in Wichita, Kansas. [View list in PDF with active hotlinks to reports.]

“We may never know exactly what happened to this woman who was hospitalized in February,” said Newman.  “But it is wrong that one man can be responsible for so much loss of life and human suffering, and never be held to account.”

Operation Rescue urges pro-life supporters to contact the Nebraska Board of Health and Human Services and ask for an investigation into LeRoy Carhart and his C.A.R.E. abortion facility in Bellevue, Nebraska, for the February 25, 2022, abortion emergency that hospitalized one woman.

Watch what happens when a pro-life activist asked Carhart to let the babies live. Recorded on March 29, 2022. (HT JM)

Another day in the life of late-term abortionist, LeRoy Carhart, who is so flustered by a woman asking him to #LetTheBabiesLive, that he couldn’t even open the door to his own clinic. #ProLife pic.twitter.com/k6LaTf8Jc5 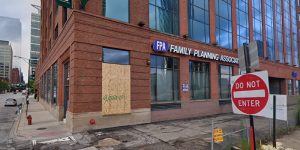