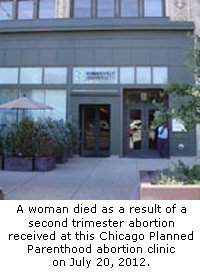 Chicago, IL – A CBS news affiliate in Chicago is reporting that a 24-year old woman died Friday, July 20, 2012, after receiving an abortion from a Planned Parenthood clinic located at 18 S. Michigan Ave. in Chicago, Illinois.

The woman was transported from the Loop Health Center Planned Parenthood abortion clinic to Northwestern Memorial Hospital where she was pronounced dead at 11:20 P.M.

Update: The Chicago Sun-Times has identified the woman as Tonya Reaves of Chicago.

An autopsy conducted Saturday determined that she died from hemorrhage following a Dilation and Evacuation abortion. The D&E abortion method is one employed in pregnancies that have advanced beyond the first trimester. In involves opening the cervix and removing the pre-born baby by dismembering him or her. The Loop Health Center Planned Parenthood advertizes abortions up to 18 weeks.

“Abortion deaths like this are completely avoidable. When a woman bleeds to death after an abortion, it is usually an indication of error on the part of the abortionist coupled with a delay in calling for emergency assistance. Planned Parenthood should be held accountable,” said Troy Newman, President of Operation Rescue and Pro-Life Nation. “Our heartfelt prayers go out to the victim’s family at this time of tragic loss.”

This incident follows a report published in the Chicago Tribune in June, 2011, that took to task abortionists in Illinois for failing to report abortion complications and exposed the fact that some abortionists did not report complications at all, in violation of the law. At that time, Illinois officials made no attempt to enforce abortion laws in that state.

While the name of the abortionist responsible for this patient death is currently unknown, Planned Parenthood’s most recent 990 Tax Forms list abortionist Caroline M. Hoke as its Medical Director.

The abortion death took place in Obama’s adopted hometown of Chicago at a time when his administration is working hard to provide funding to Planned Parenthood through the federalized health care system.

“In light of this tragedy, which is yet another in a long list of Planned Parenthood abuses, we call on President Obama to immediately withdraw all Federal funding and personal support from Planned Parenthood,” said Newman. “Friday’s death is yet another reason why men and women of conscience across this nation cannot and will not comply with the forced funding of abortion and its intentional violation of religious liberties.”