Bakersfield, CA — An ambulance was called yesterday for the second time this year to the Family Planning Associates abortion clinic in Bakersfield, California.

Tim Palmquist of Lifesavers Ministries photographed the incident as a woman was brought out on a gurney and loaded into an ambulance at about 3:40 pm on March 31, 2015.

The woman was transported to San Joaquin Hospital, which is about a block away from the abortion facility.

Once at the hospital, police were summoned and Palmquist was threatened with arrest even though he continued to photograph the incident from the public sidewalk, which is completely legal to do.

“Family Planning Associates is a very large abortion chain that in the past has enjoyed political cover,” said Troy Newman, President of Operation Rescue. “It now looks like the police are being used to intimidate anyone who attempts to document medical emergencies at their Bakersfield facility. This kind of bullying is completely unacceptable and is a violation of Mr. Palmquist’s constitutional rights. We appreciate his bravery for standing his ground and documenting this incident.”

Operation Rescue has documented at least seven medical emergencies at the Bakersfield facility since 2012.

The abortionist was believed to be Karen E. Mann, an FPA circuit-rider from Sacramento who was involved in this incident as well as a previous medical emergency at the Bakersfield clinic on February 3, 2015. 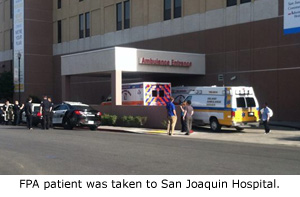 Mann was sued in 2011 for a gruesomely botched circumcision that left a child permanently disfigured and has required several surgeries. The suit alleges that Mann “was negligent and her conduct fell below the care and skill required of medical doctors and medical practitioners.”

“It appears that Mann has brought her negligent practices into the abortion clinic and is seriously injuring women at an alarming rate,” said Newman. “We wonder how many women have to suffer before the California Medical Board takes action to shut this dangerous abortion mill down for good.”

Operation Rescue has filed previous complaints concerning the unacceptable number of life-threatening injuries at the FPA in Bakersfield, but those complaints were closed without action.

“We will continue to report Family Planning Associates every time we find that a woman is injured until they finally do their duty to protect the public and shut this facility down for good,” said Newman.

Other medical emergencies at the FPA in Bakersfield took placed on the following dates:

• February 3, 2015: A woman was transported to a nearby hospital who apparently suffered a heart attack during the abortion.
• January 6, 2014: A woman was transported to San Joaquin hospital by grim-faced EMTs in what appeared to be a life-threating emergency.
• February 4, 2013: A Hispanic woman was rushed to the hospital. Her abortionist was said to be then 74-year old Vernon Wagner.
• August, 2013: Vernon Wagner was again the abortionist on duty during a medical emergency.
• October 15, 2012: Abortionist Wagner launched on a profanity-laced tirade when pro-life activists asked what happened to a Hispanic woman who was taken to the hospital moments earlier.
• August, 2012: Another woman was transported by ambulance for emergency treatment after an abortion.

Abortionist Vernon Wagner, who “practiced medicine” for over 50 years, reportedly retired last year and was replaced by Mann.