Cleveland, OH – When the ambulance pulled up to Preterm, a Cleveland, Ohio, abortion facility, at around 3:00 p.m. on July 26, 2017, pro-life activist Fred Sokol knew exactly what to do. He should. He’s had far too much practice documenting such incidents at Preterm.

Cell phone at the ready, Sokol photographed emergency workers entering Preterm with a gurney. He knew the only way up to the third-floor abortion procedure rooms was via an often-malfunctioning elevator.

Sokol watched and waited. This time, the elevator must have been working because it only took about ten minutes for the emergency responders to emerge from Preterm pushing their gurney.

As Sokol clicked away on his cell phone camera, he captured images of a woman covered in a pink blanket who was quickly loaded into an awaiting ambulance.

Under the blanket could be seen the chocolate brown arm of the patient — obviously African-American – who was from a community specifically targeted for abortion by Preterm.

Once the back doors were closed on the ambulance, it quickly sped away, transporting the woman to a nearby hospital. Operation Rescue is seeking records concerning the incident, which may help shed light on what happened. 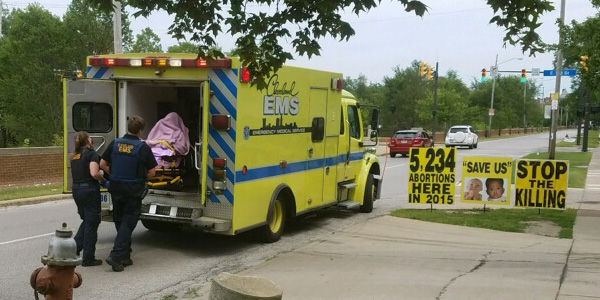 The timing of the medical emergency was significant since Preterm’s Medical Director, abortionist David Burkons, was disciplined by the Ohio Medical Board just last week when it voted to suspend Burkon’s medical license for six months for illegally providing his staff with blank, signed prescription pads for the distribution of controlled substances. Such prescriptions were not noted in his medical records.

While the Medical Board has yet to produce the final suspension order, Burkon’s allegations, filed in 2015, can be read here. Meanwhile, Burkons continues to conduct abortions at the Northeast Ohio Women’s Center in Cuyahoga Falls, Founder’s Women’s Health Center in Columbus, Capital Care Network of Toledo, and Preterm.

Preterm is a high-volume abortion facility that has sent too many of their injured abortion patients to emergency rooms.

Preterm was the site of Lakisha Wilson’s fatal abortion on March 21, 2014. Wilson had reported to Preterm for a second-trimester abortion, but something went horribly wrong. Wilson suffered from massive blood loss that sent her into cardiopulmonary arrest. By the time Preterm dialed 911, Wilson wasn’t breathing at all. A malfunctioning elevator delayed emergency medical care. She was transported to Case University Medical Center, where she was placed on life support then pronounced dead on March 28.

At least a dozen medical emergencies involving emergency ambulance transport have taken place at Preterm, including one on February 13, 2016, when a woman suffered a possible hemorrhage and uterine perforation during a 21.3 week abortion.

Another shocking case, a 300-pound woman suffered from hemorrhaging and needed immediate transfer to the hospital, but again, the elevator was not in working order. Extra emergency assistance was summoned to help carry the bleeding patient down two flights of stairs. It is inconceivable why Preterm abortionists would conduct such a high-risk surgical abortion knowing the elevator was down.

“Preterm is a proven danger to the public. We have been calling for its closure since Lakisha Wilson’s tragic death,” said Operation Rescue President Troy Newman. “From its dangerous facility conditions and patient care practices to its disgraced Medical Director, everything about this abortion business is troubling. It should be closed immediately!”