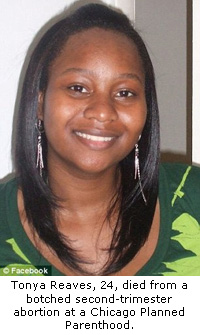 Chicago, IL – New documents released in the Tonya Reaves tragedy reveal a timeline leading to her death that clearly shows Planned Parenthood delayed summoning emergency care for the dying woman for five and a half hours after a severely botched abortion.

At 11:00 a.m. on Friday, Reaves received a second-trimester dilation and evacuation (D&E) abortion at Planned Parenthood, located at 18 S. Michigan Ave. in Chicago.

After the abortion, Reaves suffered bleeding. The bleeding continued at Planned Parenthood for five and a half hours before a Fire Department ambulance finally took her to Northwestern Memorial Hospital at 4:30 p.m. according to a report by Steve Miller of the CBS news affiliate WBBM.

“It is clear that Planned Parenthood botched the procedure that resulted in uncontrolled bleeding then failed to treat the hemorrhage while Reaves was at their clinic, allowing her to bleed for over five hours before finally calling for help. There can be no doubt that this delay contributed to her death,” said Troy Newman, President of Operation Rescue and Pro-Life Nation. “The injury and the untreated hemorrhage happened at Planned Parenthood and they are solely responsible for it.”

Once at the hospital, it appears the Emergency Room staff had to start from scratch to figure out the extent of Reaves injuries.

According to Dr. James C. Anderson, M.D., in his 30 years of experience as an Emergency Room Physician, abortions clinics never informed him about their patients’ conditions.

“I have always had to evaluate the situation, come to my own conclusions, and initiate what I thought was appropriate treatment. This definitely created some time delays that were not in the patient’s best interest,” stated Dr. Anderson. “These delays can have life-threatening implications when dealing with hemorrhage or infection.”

At 5:30 p.m., doctors performed an ultrasound, which revealed the abortion was incomplete, something solely the responsibility of the Planned Parenthood abortionist.

Reaves was then given a second D&E abortion procedure, but that apparently did not solve the problems and pain Reaves was experiencing.

A second ultrasound revealed a perforation in Reaves uterus.

Reaves was returned to the operating room at 10:12 p.m. for additional surgery where “an uncontrollable bleed was discovered.” At 11:20 p.m., Reaves was pronounced dead.

“Planned Parenthood butchered Tonya Reaves, delayed her access to emergency care, then left the emergency room doctors to figure out what happened to her. By the time they discovered the true extent of her injuries, it was too late to save her life,” said Newman.

“Planned Parenthood is trying to minimize their responsibility for Reaves completely avoidable death that appears to have resulted from a combination of their negligence, delay – possibly for the purpose of cover-up — and lack of communication with emergency providers. That abortion clinic is dangerous and should be closed. The abortionist should not be allowed to continue to inflict harm on women and should have his medical license revoked.

“We again call on President Obama to stop protecting Planned Parenthood and halt all Federal funding to the abortion giant in order to prevent other women from suffering Tonya Reaves’ fate.”